In the 802.11 WLAN security world I frequently refer to pyrit as the ‘unsung hero’.  Pyrit is an awesome tool that can do so much but doesn’t tend to get the recognition as more well-known tools like the aircrack-ng suite and coWPAtty.  Comparing these different tools can’t really be done in an apples-to-apples fashion but that doesn’t change the fact that pyrit should be on the tips of tongues more frequently than it is when discussing WLAN attacks.  Pyrit (and cpyrit) frequently don’t get mentioned until the idea of using GPU’s for attacking WPA-PSK handshakes comes up.  Pyrit is so much more than a tool that allows you to make use of the GPU processing capability of your device(s).  Even if you aren’t going to use GPU’s for attacking (auditing) WPA-PSK security, pyrit should be at the forefront of your mind.  That being said, this article is not about the many uses of pyrit, it is about getting pyrit to work with the Nvidia GPU in your Apple OS X device.

I have used pyrit and GPU’s with Linux, both on local machines and using Amazon EC2 instances, but until recently never gave much thought to using my Mac for the task.  Because of Apple’s lack of use as a gaming platform we often do not think of it as a system that will provide high-end GPU performance.  The lack of video card modularity combined with limited choice when choosing a graphics card on iMac and MacBook’s is a second reason people tend not to think of their OS X device as a worthy tool for WPA-PSK attacks.  But it’s not an entirely fair assumption.  While they don’t represent the bleeding edge in GPU performance I have discovered that the GPU processing capability of my Apple devices is worthy enough to let them play, too.

I also have a 15″ late 2013 MacBook Pro with a 2.6GHz i7 processor with 16GB RAM and an upgraded (for its time) Nvidia GeForce GT 750M card.  Both of these configs represent the highest level of upgrade possible at their time of purchase.  Without any overclocking the performance results I get with these two different systems can safely be considered the upper limit of what you should expect for MacBook Pro’s/iMacs purchased around the same time.

A Few Words on GPU Processing

GPU Processing is a parallel computing platform that allows developers to use the GPU (as opposed to or in addition to the system CPUs) while still writing code in familiar programming languages (C++, C, Python, etc.).  The parallel computing part is important.  GPUs often have hundreds of cores that can be used in parallel.  This contributes to dramatically improved number crunching that cannot be achieved on current CPU architectures.  The whole topic is complex, rapidly evolving and packed with a lot of “it depends” types of discussion.  Arguing the finer points of GPU vs. CPU architectures is beyond my particular skill set.

According to Nvidia, GPU processing has been around, in its most current form, since about 2006.  The modern General Purpose GPU, one that can process high-level language code (like C, C++, & python) continues to evolve and advance at an amazing rate.  There are hundreds of millions of GPU devices in the world  and, when leveraged, bring a level of processing to the table that is significantly faster than traditional CPU processing.  For example, this YouTube CUDACasts video (https://www.youtube.com/watch?v=jKV1m8APttU) demonstrates how some simple python code, which required about 12 seconds to be processed by the the system CPUs can be executed in about 0.13 seconds when using the systems GPU.  That’s an amazing difference in time that illustrates the potential to dramatically reduce the time needed to perform calculations on a system.

In the 802.11 WLAN world, calculating the Pairwise Master Key (PMK) is an intense operation, requiring 4,096 separate hashing operations for each passphrase.  When doing this for every word in a dictionary file or when doing it for every string generated by crunch, you need to spend a lot of processing time.  Using GPUs to help do this takes things to a different level, one that cannot be glimpsed by a system’s CPUs.

Getting your GPUs to get into the game is not automatic.  It requires you to install a lot of supporting pieces of code to make things work.  And, unfortunately, it’s not intuitive to most of us.  This is true in both the Mac and Linux world (I don’t care about Windows when it comes to using GPUs for what I have in mind).  This particular guide is designed to help you get things working on your OS X device.

I have performed these steps on my MacBook Pro and my iMac and both work quite well.

This tutorial breaks the process of installation down into four parts.  They are:

Click on the  icon and select About this Mac. Confirm your systems video card by clicking on System Report…

Make note of the Chipset Model value.  You will need it in the next step.

Video Card Info on my iMac 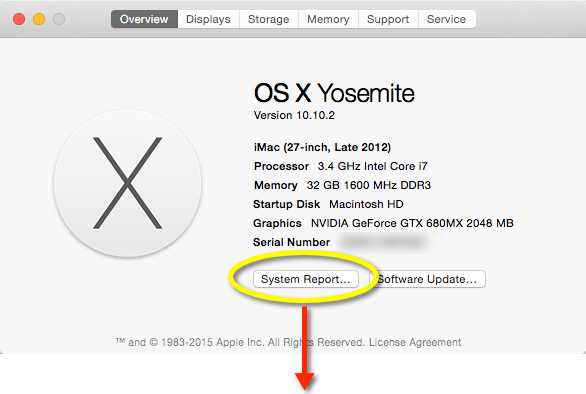 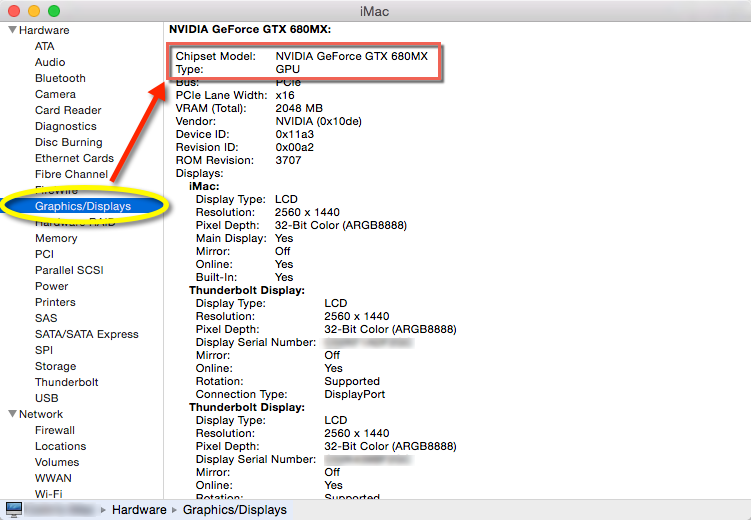 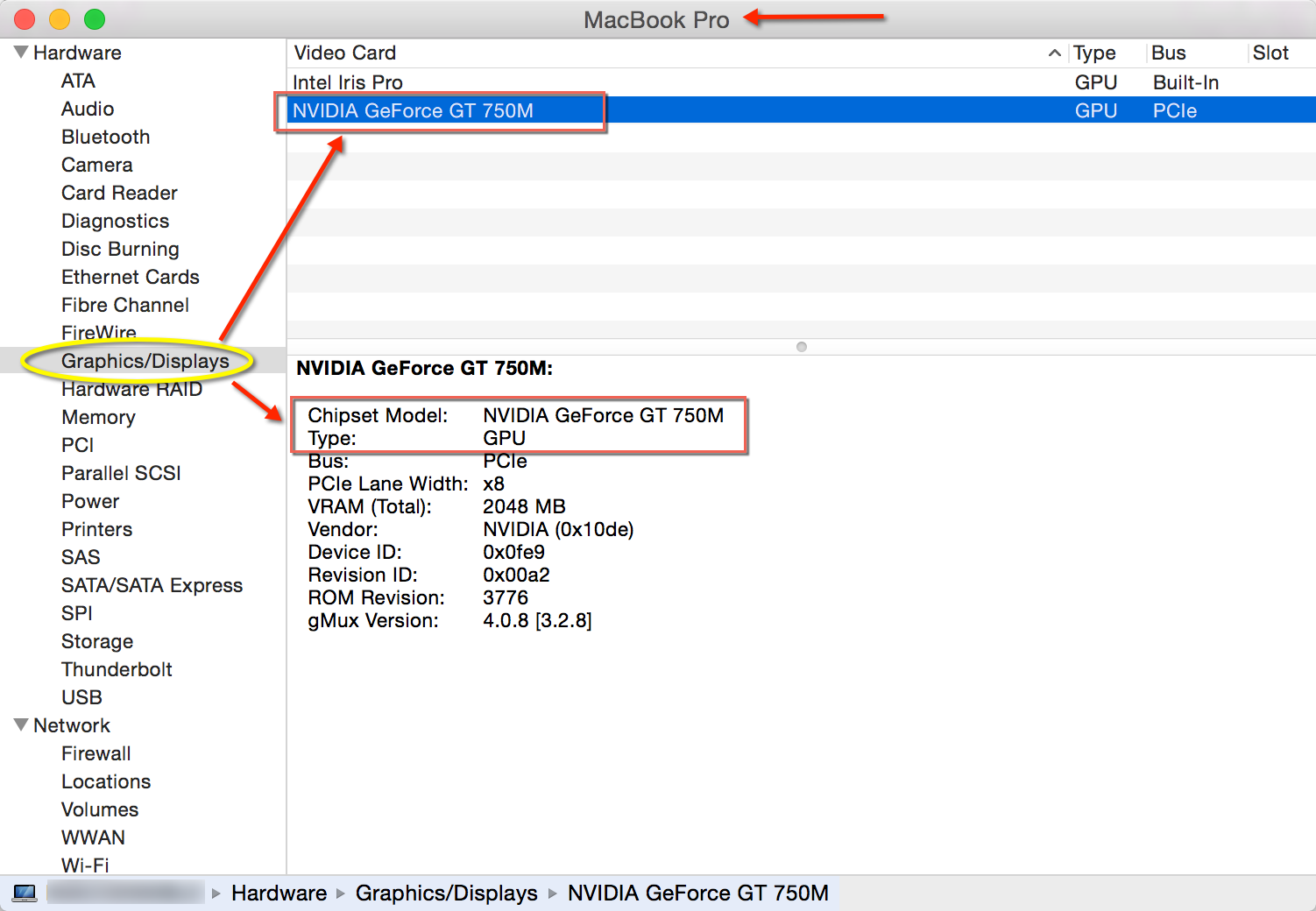 Head over to Nvidia’s website to make sure your video card is supported. As of the time of writing the list of supported GPU’s can be located at https://developer.nvidia.com/cuda-gpus. 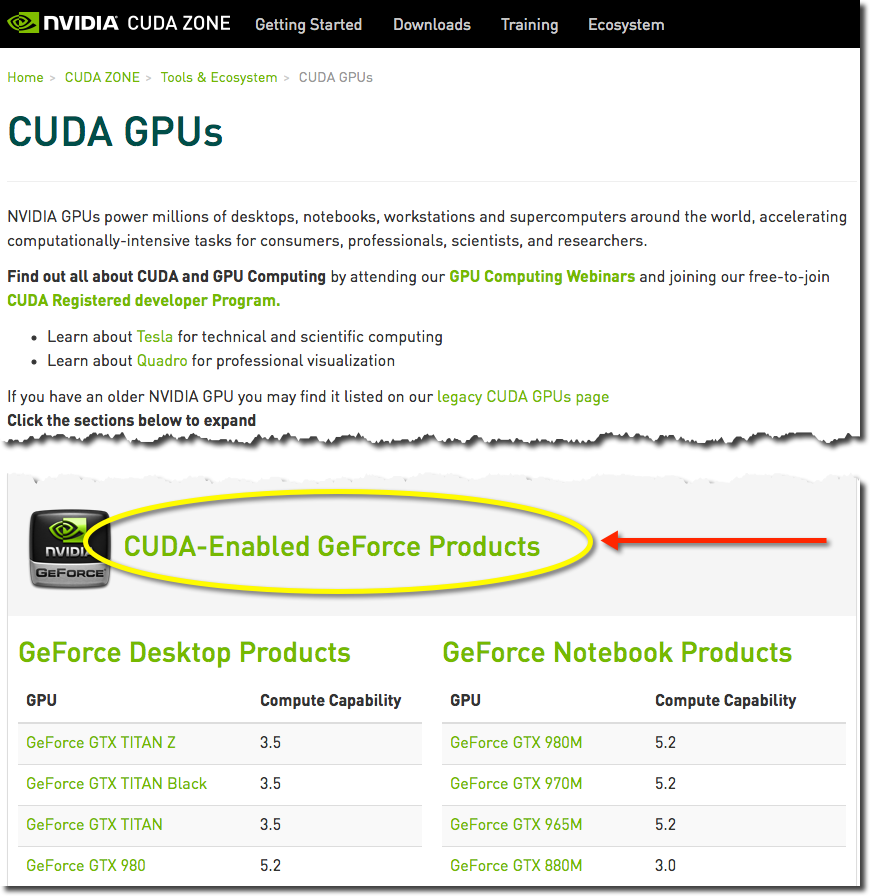 Search the list to make sure your video card is listed. 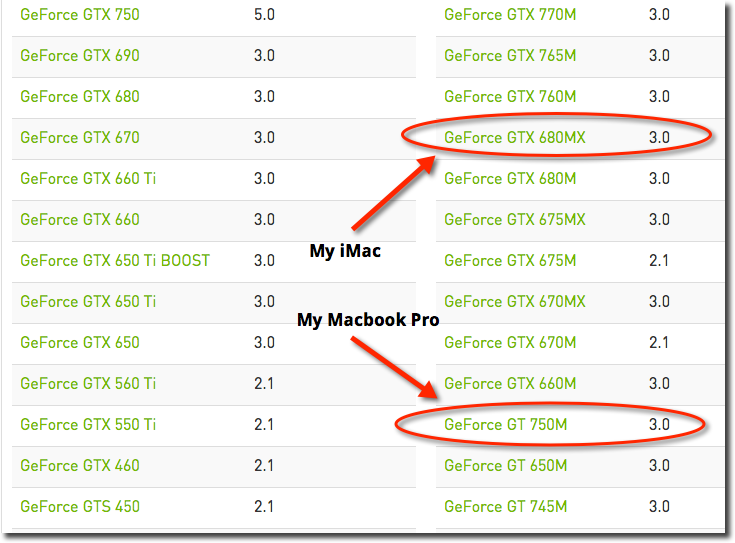 Note:  These steps assume you are downloading everything into the Downloads directory on your system.

Download and install Xcode from the App Store.  Search for it in the App Store or go here: https://developer.apple.com/xcode/downloads/

After installing Xcode, open a terminal on your OS X device and install the developer tools (which includes the command-line tools).  Please note that this is an important step.  Neglecting to install these tools will cause things to fail at the very last moment. 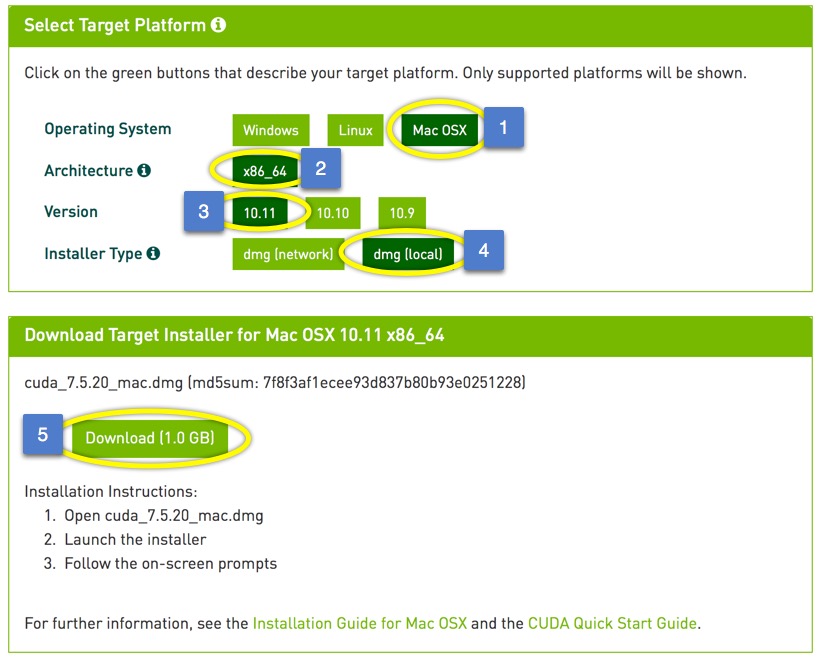 If interested in reading more about libdnet you can visit the project page at:  https://code.google.com/p/libdnet/

python-libpcap (pylibpcap) is a module for the packet capture library.  The main project page can be found here: http://sourceforge.net/projects/pylibpcap/ 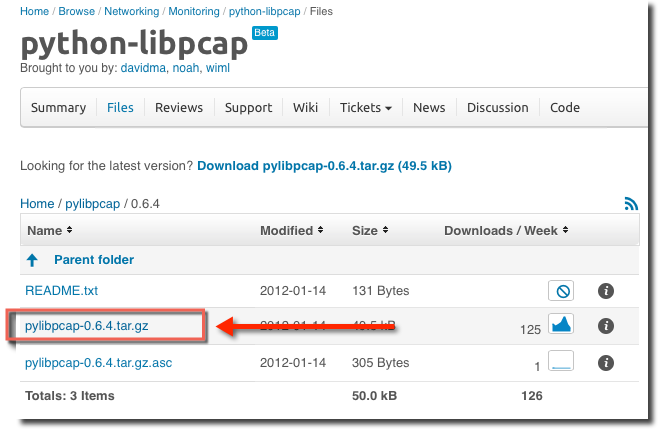 You can directly download the most current version of scapy here:  http://www.secdev.org/projects/scapy/files/scapy-latest.tar.gz

Scapy is a crazy-powerful packet manipulation tool (and then some) that allows you to create any type of packet you might want.  It is regularly included on lists of who’s who in network security tools.

Verify you have all the tools you need

You should now have all of the packages you will need to install.

From Finder, double-click the CUDA package to launch the installer.  Accept the defaults until you get to the Installation Type section.  You do not need the CUDA samples so you can clear that checkbox and save some drive space (unless you want them, of course). 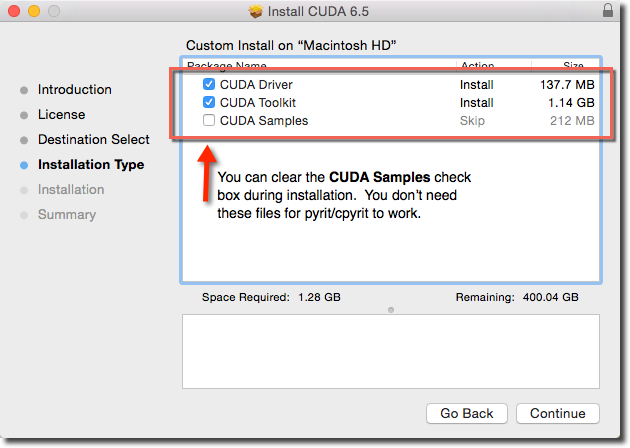 At this point, pyrit is installed but cpyrit is not.  Before moving on this is a good point to get a baseline to see what pyrit can do just using you CPU (not GPU).  To get a baseline, run the following commands from a terminal window:

This command will show you how many CPU’s are available on your system.

This command will take several seconds to complete.  Once completed it will tell you how many PMK’s per second your system CPUs can compute.

Make a note of your system’s CPU PMK generation capabilities and then continue to the next step where support for your GPU will be added.

Wanna’ Do a Real Test?

If you want to see how long it will take your system to attack a handshake WITHOUT GPU support, follow the next few steps.  If you don’t want to do the test, move on to the Install cpyrit section.

Download my WPA-PSK-optimized wordlist.  This is a list of about 20 million passwords taken from a variety of Internet-available wordlists.  It has been optimized to contain only words that are valid WPA-PSK passphrases.  You can download it here:

From a terminal, decompress the wordlist.

Download a sample capture file that contains a WPA-PSK handshake.

From a terminal (all on one line):

Note:  Without GPU’s this make take a while (many hours).  If you want to know how long it takes run the command above with the time command (see below).

Once the attack completes make a note of how long it took.  You can compare this to the results you get after enabling GPU support (next).

Last step!  This will enable pyrit to use your system’s GPU capabilities.

Now that cpyrit is installed run the following commands from a terminal window:

You should now see you GPU device listed.  Note that one of your CPU’s is removed.  In my system I have 7 CPU cores plus the CUDA device.  This is normal.  One CPU will be removed for each GPU.

Your GPU should have a dramatically higher PMK rate than your CPU.  The total PMK rate is the sum of the GPU and CPU cores.

Give It a Real Test!

In case you didn’t do the baseline test before, here are the steps again to do a real test:

Download my WPA-PSK-optimized wordlist.  This is a list of about 20 million passwords taken from a variety of Internet-available wordlists.  It has been optimized to contain only words that are valid WPA-PSK passphrases.  You can download it here:

From a terminal, decompress the wordlist.

Download a sample capture file that contains a WPA-PSK handshake.

From a terminal (all on one line):

Note:  With GPU support this should only take a few minutes.  If you want to know how long it takes run the command above with the time command (see below).

If you liked this post, please consider sharing it.  Thanks!